A beautiful and intimate, yet hard course made for a picturesque but challenging race at the Montana Marathon.

This past Sunday I ran my fourth marathon at the Montana Marathon. It was a disappointing race for me in many respects but I still wanted to write a race re-cap to pass on all the information and tips from my experience to help others be more informed about this marathon.

Below I will lay out how each of mile segments went for me and then I will wrap up this race report with important race information anyone considering this race should know.

The starting 6 miles were pretty uneventful. The race started at 7 AM so it was still cool for the first 3 miles or so (about 55 degrees, though it was unusually warm this morning). The incline was subtle, there were no non-race related cars on the road, and it felt good to get the legs going. I was on pace for the majority of these miles, though I did have to make 2 quick stops at the bathroom.

Miles 6-11 were hard. It was heating up and it was an open straight road and the crowd (if you even want to call it that in the first place) was starting to thin out quite a bit. There were also quite a few, deceptively steep & long rollers. My pace was a bit under what I planned at this point, but it was ok because I anticipated being able to make up for it in the descending miles following it.

This is where the bulk of the steep descent was. Coming off the last roller it was a hard and fast drop into the valley along the ridge of a hill. Though the breeze was great and the view was beautiful, the intense decline was so hard on my legs, despite my pace picking back up. By this point, I started passing a few people and it thinned out even more. My husband Chris and mom were out on the course driving around and cheering me on, though, and it was so welcome.

During miles 15-17 the wheels started to fall off. My left hip and glute started to talk to me (from the descent). I tried to get my mind off of it and still keep going despite the discomfort, but still, I was struggling to keep my pace where I wanted it.

These miles are where I really saw my goal time fall away from me. Around this time, I ran through the neighborhood around the Yellowstone Country Club and there was quite a bit of uphill. Frankly, between that climb and my growing hip pain, it was a struggle.

After we got out of the country club neighborhood we turned onto a pedestrian walkway alongside a road. It was nice to be off the road, but that walkway was uphill as well.

Around mile 20, I started calculating what I would need to do in order to reach my goal (3:28 and a Boston qualifier) and I concluded that it was out of reach. I was right around 2:44 and I would’ve needed to run sub 8-minute miles in order to make it in on time. Given that the pain was growing and I was already struggling to run 9:15 minute miles, I realized that I had two options: push it to see how fast I could go while risking injuring myself so bad that I couldn’t finish or taking it easy so I could finish, despite the pain.

I chose the latter and I texted Chris, “My hip hurts. And I’ve missed my qualifying window. So I’m gonna take it easy and walk/jog. At least I’m running a marathon!!!”

You know it’s bad when I start texting Chris in the middle of a marathon. In fact, Chris said, “It’s never a good sign when I get a text from you during a race!”  I did, however, keep pushing. In addition to my hip hurting, the temperatures were increasing too. So I walked a bit here and there when I was in the sun and I ran for the rest of the time and when I was under tree cover.

Turning into Pioneer Park in Billings, I started crying. Usually, when I cry during a marathon it’s because of overwhelming positive feelings but this time it was because of disappointment. Though I was proud that I pushed through, I was so frustrated with my hip and how it just wasn’t my day.

Still, I finished with a 3:51:51. My second fastest marathon to date, but over 23 minutes slower than I planned.

After passing through the finish line, I got my finishing medal, snacks, and met up with my family. They were so encouraging and supportive as they always are, reminding me of how blessed I am.

I cried a little longer about things but then decided to move on and go to the massage tent to have my hip worked on. Within seconds of the massage therapist working on my hip, she discovered the super tight interior muscle that was giving me so much grief. Weirdly, I was relieved that I wasn’t dreaming up the pain!

I told the massage therapist she was a saint for working on me after sweating for 4 hours, and she acted like it was nothing. She also was a saint because she relieved the pain a bit and I could comfortably walk to the car. I stretched more throughout the day and made sure to keep up on my nutrition and hydration and had a pretty comfortable rest of the day.

Interestingly enough, though my hips and glutes were still touchy in the days after the race, the rest of my body wasn’t too bad, considering that I’d run a marathon. To me, it was proof that I didn’t run it as hard as I could have. But it’s what I had to do to prevent going up in flames from my hip.

Thankfully, I set an appointment with my trigger point release massage therapist for Wednesday of this week. I couldn’t be more excited about that appointment!

Things I Wish I Knew About The Montana Marathon & Other Race Observations:

Read my other running blog posts:

Please share your recipe comments and feedback. It helps us create better content and helps other readers find what they're looking for. Cancel reply

Hi! Thank you so much for coming by. I'm a self-taught cook of 20+ years, food photographer, runner, and dog lover.
I believe healthy food should be accessible, doable, and delicious! After all, it fuels us for all life's activities and adventures. Join me as we make quick, healthy, and crave-worthy recipes! Read More…

Find Your Next Favorite Recipe 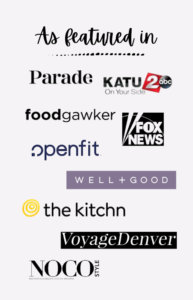