A satisfying and healthy dessert that delivers a host of health benefits.

Chia seed puddings were so very 2016. I’m just now getting into them.

Every pudding I tried in the past either lacked flavor or was too much to handle: too thick, too oily from excess coconut cream, you name it. I just couldn’t deal.

Then, a few weeks ago, when thinking of what to make for a gluten-free friend for dinner, a strike of inspiration urged me to try it again. This time though with flavor and a mouthfeel I could get into.

A 2019 Vegan Chia Pudding Parfait I Can Get Into

I started with unsweetened vanilla almond milk, as the subtle vanilla flavor forms a great basic canvas. Then I mixed in maple syrup, spices, and -- the star of the show, golden raisins. The spices add personality to the pudding; the raisins a pop of bright flavor. Top it with some Coconut Vanilla Spiced Granola (with the noted vegan adaptations, of course) and we have a dessert that is both gluten-free and vegan.

Follow my instructions for a vegan parfait or see my optional variations for a traditional version (the biggest difference is the sweetener used). Either way, we’ll have a treat that satisfies even the stubbornness of sweet teeth without a sugar high or need for an immediate nap. 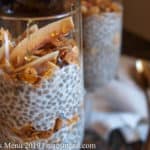 Questions or comments about this Vegan Chia Pudding Parfait recipe? Post in the comment section below and I’ll get back to you as soon as possible!

Like or make this recipe? Follow Mae’s Menu On Your Favorite Platforms & Hashtag Your Food Pictures With #MaesMenu

Please share your recipe comments and feedback. It helps us create better content and helps other readers find what they're looking for. Cancel reply

Hi! Thank you so much for coming by. I'm a recipe developer, runner, food photographer, and dog lover.
I believe healthy food should be accessible, doable, and delicious! After all, it fuels us for all life's activities and adventures. Join me as we make quick, healthy, and crave-worthy recipes! Read More…

Find Your Next Favorite Recipe